Many riders are leery of the stock chain cam drive in late model big twins. While it is true that the early version introduced in 1999 was often not well suited to high performance applications, the later version introduced in the 2006 Harley-Davidson® Dyna® model, and later incorporated in all big twins in the 2007 model year, was vastly improved.

Experience has shown that the new chain drive with hydraulic chain tensioners works well for all but the most demanding high performance applications. That"s why S&S now offers our most popular grinds for 2007-'16 big twins in a chain drive version. The most obvious advantage to a chain drive cam set over our popular gear drive cams is the expense. When you replace the stock cams with an S&S chain drive cam set, all you are replacing are the cams. You re-use the stock cam drive components so you save money on parts. Saving money has always been a good idea, but never more so than it is today. 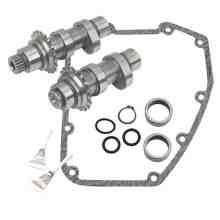 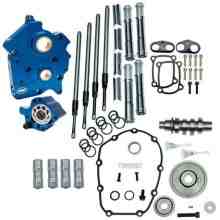